Making the Instrument of the Indies: Artisanal Skills and Calculating Longitude in 1577 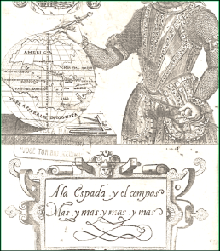 During the late fifteenth and sixteenth century, the Portuguese and Spanish monarchies developed into the two first global empires. In 1494, a treaty was signed in Tordesillas between these two seaborn powers, drawing an ideal meridian line dividing the globe in two areas of influence. However, the precise reckoning of this line, and of the antimeridian one later placed in the Pacific Ocean with the treaty of Zaragoza (1529), was not possible without a precise mathematical method to measure the longitude. Especially at the Castilian Court, the Habsburgs Monarchy promoted those mathematical practices that were helpful for the control of their far-reaching dominions. The new-born mathematical science of Cosmography was instrumental to this goal. Professor Portuondo’s talk will focus on the artisanal skills and tacit knowledge that were necessary to build the instrument used to observe the lunar eclipses for the purpose of calculating longitude on behalf of the Spanish Court.

This event is organized and moderated by the team of the Tacitroots project at the University of Milan, directed by Prof. Giulia Giannini.

The event is free. To register, please write an email to cristiano.zanetti@unimi.it