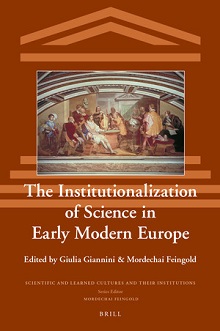 The emergence of the first European scientific societies in the seventeenth century has attracted scholarly attention, at least since the publication in 1928 of Martha Ornstein’s The Rôle of Scientific Societies in the Seventeenth century. Ornstein and her successors considered the foundation of scientific academies as a fundamental step towards the establishment of modern science in Europe. Such a phenomenon became possible owing to the gradual shift – during the second half of the seventeenth century – from a social system of knowledge based on patronage networks to organized institutions sponsored by a public authority. This shift created the conditions for the emergence of collaborative scientific organizations based on experimentation, which complemented existing university associations, and which were connected to political power (either verbally sponsored or financially funded by princes and kings). This process institutionalized, promoted and prescribed specific scientific practices, alternative processes of legitimization, as well as new protocols of argumentation and communication. Important studies have highlighted the influence that academies such as the Royal Societyor the Académie Royale des Sciences had exerted on the emergence of this new scientific practice. But the extent and the complexity of the phenomenon continue to expand the boundaries of research. Moreover, certain aspects of this pivotal shift remain obscure – for example, the historical dynamics that engendered the almost simultaneous appearance, in different parts of Europe, of public institutions based on collaborative and experimental research. Nor had sufficient attention been given to the relations of the new scientific organization with existing learned institutions, or to the informal and formal ties between the various academies and private scientific circles within and without the universities.

The present volume aims to contribute to a better understanding of the scientific and institutional context that gave rise to the first European academies – especially the Accademia del Cimento in Florence’ the Academia naturae curiosorum in Schweinfurt; the Royal Society in London; and the Académie Royale des Sciences in Paris. The several essays attempt to provide a novel framework that would account for the foundation and the activities of these new forms of scientific organization – in Portugal and Poland as well as in England, France, and Italy – a framework that also encompasses traditional institutions of higher learning. For too long the emergence of scientific academies has been explained as an organizational shift that derived exclusively from new intellectual demands – especially as a reaction to the ‘stagnating’ environment of the universities. However, as this volume will attempt to demonstrate, the relationship between the new forms of scientific organization and traditional institutions was far more complex. On the one hand, as recent research has already established, the course of studies at many universities proved spacious enough to include the teaching of the old and new learning – including experimental science. On the other hand, not only were the promoters of the new sciences educated in the universities, many members of the various European academies actually held university positions throughout much of their careers. Furthermore, the existence of a large number of learned academies since the late fifteenth century, suggest that this organizational model had been designed with a more expansive vision of intellectual activities in mind. Thus, the emergence of scientific acadmies cannot be explained exclusively as a response to the new climate produced by the new science; rather, that scientific practice accommodated itself to an already existing organizational model.