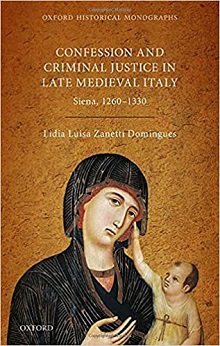 This monograph provides an in-depth comparison of lay and religious sources produced in Siena (1260-1330) on criminal justice, conflict and violence. Two main trends have been highlighted in the development of criminal justice in late medieval Italy. Firstly, that the practice of revenge was still popular among members of all social classes. Secondly, that crime was increasingly perceived as a public matter that needed to be dealt with by the government, and not by private citizens. These two aspects are partly contradictory, and the extent to which these models reflect the reality of communal justice is still open to debate. The book sheds light on this question through the contribution of religious sources, which scholars have started comparing only very recently to secular ones with regard to these topics. The underlying argument is that religious people were an effective pressure group with regards to criminal justice, thanks both to the literary works they produced and their direct intervention in political affairs, and their contributions have not received the attention they deserve. It is suggested that the dichotomy between theories and practices of ‘private justice’ (e.g. revenge) and of ‘public justice’ (trials) should be substituted by a framework in which three models, or discourses, of criminal justice are recognised as present in late medieval Italian communes: in addition to the trends described above, also a specifically religious approach to criminal justice based on penitential spirituality should be recognised as an influence on the policies of the communes. This case study shows that, although the models were competing, they also influenced each other; and none of them managed, in this period, to eliminate the others, but they coexisted.