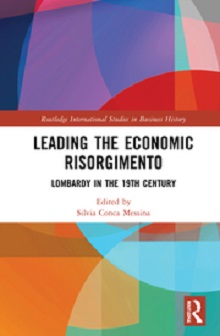 Lombardy, with about 10 million inhabitants, is today the most populated and prosperous region of Italy, and Milan is a renowned capital of art, fashion and design. During the 19th century until WWI, the region gradually became the leader in Italy’s economic development and distinguished itself in the European economic landscape for its long-standing industrial strength and diversified economy, which included one of the Europe’s most productive agricultural systems. It was the economic locomotive of contemporary Italy, contributing to the economic Risorgimento that complemented the country’s political resurgence.
The present volume gathers the contributions of some major experts on the subject, providing an in-depth analysis of Lombardy’s pattern of development, consisting of an exceptionally symbiotic and balanced interplay of sectors (agriculture, industry, trade, and banking) in a gradual yet steady growth process, also supported by progress in the education system. During the century, there was a shift away from an economy based on agriculture and commerce to a progressively more industrial economy and this process accelerated from the 1880s. The secret of this dynamic balance was Lombardy’s active relationship with the rest of Europe and with the international markets.

Aimed at scholars, researchers and students in the fields of early modern and modern history, economic and social history, the book provides a clear explanation of Lombardy’s economic development during the long 19th Century.