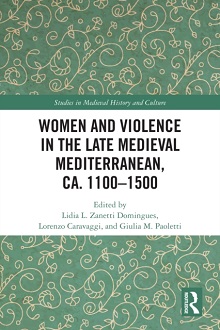 This pioneering work explores the theme of women and violence in the late medieval Mediterranean, bringing together medievalists of different specialties and methodologies to offer readers an updated outline of how different disciplines can contribute to the study of gender-based violence in medieval times.
Building on the contributions of the social sciences, and in particular feminist criminology, the book analyses the rich theme of women and violence in its full spectrum, including both violence committed against women and violence perpetrated by women themselves, in order to show how medieval assumptions postulated a tight connection between the two. Violent crime, verbal offences, war and peace-making are among the themes approached by the book, which assesses to what extent coexisting elaborations on the relationship between femininity and violence in the Mediterranean were conflicting or collaborating. Geographical regions explored include Western Europe, Byzantium, and the Islamic world.
This multidisciplinary book will appeal to scholars and students of history, literature, gender studies, and legal studies.